Currently we had the following LAB generated: 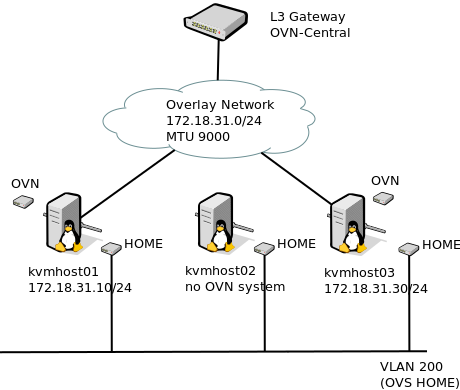 Before we go and create some VMs, we should discuss, how we want to interconnect them with the outside world. There are two major options L3 or L2. As the SERVER Network outside OVN is an VLAN based Network (VLAN 200) with many VMs on it, we focus on L2 Breakout, to had an easy migration path from non-ovn VMs to ovn VMs and to use all existing Network Functions (Gateway, DHCPv4 + v6 …).

We want an L2 Breakout, which connects the Logical Switch SERVER with the existing OVS HOME on VLAN 200. And there are also 2 options:

FOr both L2 breakout’s we need a Brige Mapping, which is a definition of a network_name:OVS_Bridge. For example, we want a network name physnet200 to be on OVS Bridge HOME we will use:

This needs to be set on the Chassis/KVM Node where we need it (see below).

This L2 breakout is an direct breakout on every KVM Node. Means there is an “local” connection between the Logical Switch SERVER OVN Bridge and a OVS Bridge which connects to VLAN 200. If we generate an localnet port on OVN-Central, this localnet port gets predecence above other connection mechanisms (geneve tunnels for example).

What does it mean?

An direct HA concept does not exists, as if one node looses the local L2 breakout, all VMs on this Node looses the connection to outside L2. NO reroute to an other Node will be occure. 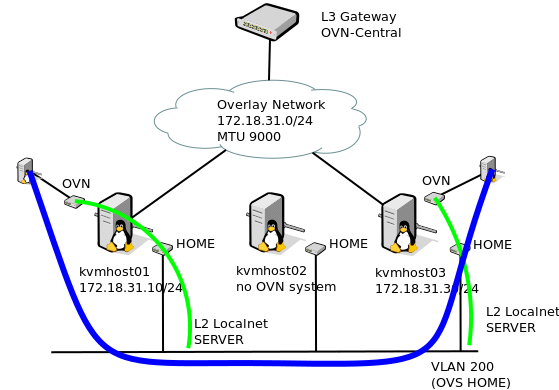 On OVN-Central (will be transferred to every OVN attached Chassis/KVM Node):

This will configure a localnet port with VLAN Tag 200 and Bridge Mapping physnet200 to HOME. Which will mean:

Send all unknown L2 traffic to this logical Port, switch it over to Bridge named HOME with VLAN Tag200.

What does it mean?

It seem an HA concept for this may exists, but on several sides you can read not to use L2HAGateway implementations as they are likely to create loops or other problems. 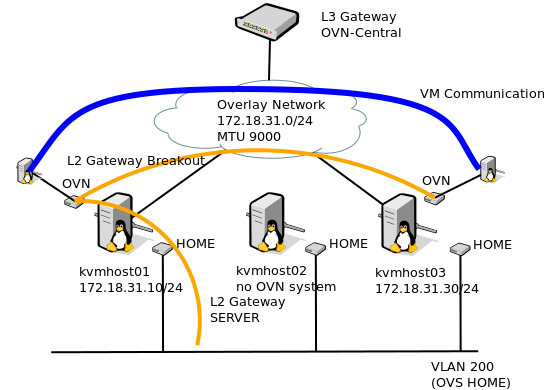 Only on Chassis/KVM Node which is the L2 Gateway Chassis (in our LAB kvmhost01):

On OVN-Central (will be transferred to every OVN attached Chassis/KVM Node):

The lsp-set-options need to be on one Line with spaces as delimiter, no commata or breakup in more lines. This won’t work, trust me i tried it serveral hours …

This will configure a l2gateway port with VLAN Tag 200 and Bridge Mapping physnet200 to HOME only on Chassis with given ID (kvmhost01 in our LAB). Which will mean:

Conclusion for our LAB:

I will use the L2 Gateway breakout for the upcoming Lab Parts, as i see one advantage over the L2 localnet breakout: You can have participating hosts, which only needs a connection to the overlay network and an OVN integration and they can participate on the hole environment, they can even host Systems within VLAN 200, wihtout needing an Interface in this VLAN (as we will transform kvmhost02 in near future into such a system). Downside is the single point of failure but this is acceptable in this scenario.